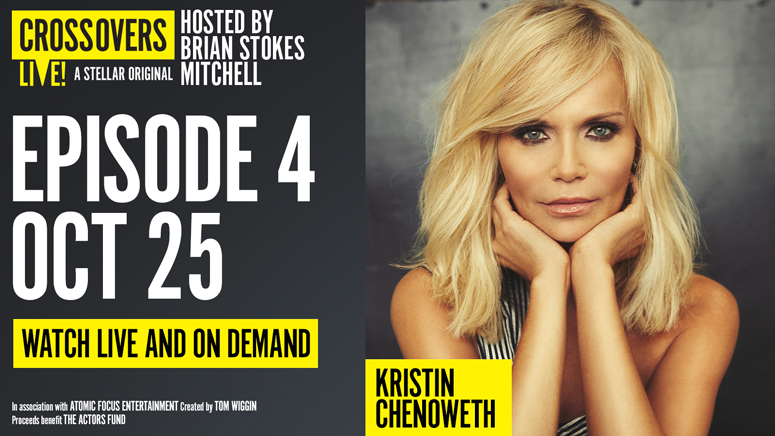 Crossovers Live! With Kristin Chenoweth — Online - Host Brian Stokes Mitchell is joined by Tony and Emmy award-winning actress and singer Kristin Chenoweth. She’ll give us her take on how an opera student from Oklahoma winds up winning a Tony for "You’re A Good Man, Charlie Brown" and then creates the iconic role of Glinda the Good Witch in one of Broadway’s biggest hits ever, "Wicked". We’ll hear about her move to TV and winning an Emmy for "Pushing Daisies", as well as her time on cultural TV touchstones "The West Wing" and "Glee". She’ll also discuss her success in the recording studio with her No, 1 album from 2016 "The Art of Elegance", her more recent recording "For the Girls", and she’ll share exactly what a star on the Hollywood Walk of Fame means to her. Hosted by Tony Award-winning actor Brian Stokes Mitchell ("Man of La Mancha"), "Crossovers Live!" is an exciting and innovative talk show featuring stars who’ve made the jump from stage to film, television or music. Cheeky, thought-provoking, and wildly entertaining; iconic artists share rarely heard stories and elaborate on their transition between different types of stardom. Candid discussions and unexpected laughs are just further reasons why "Crossovers Live!" is can’t-miss entertainment. A minimum of 10% of net proceeds from "Crossovers Live!" will benefit The Actors Fund.  More Details